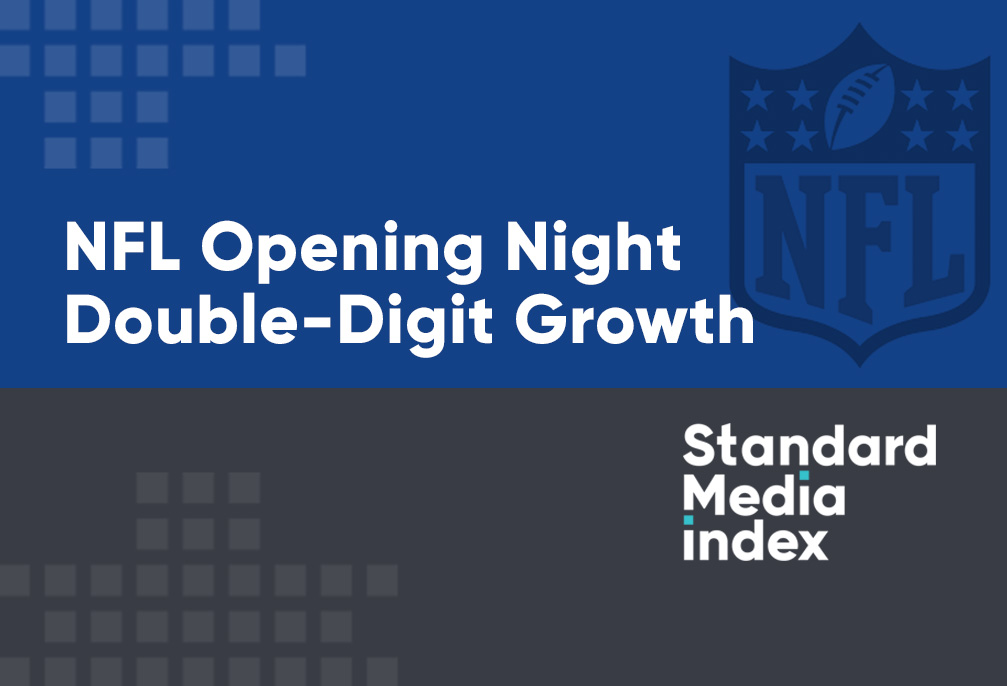 The NFL season kicked off on schedule on September 9th, and networks hope it will be business as usual on the ad front.

So far, so good. According to Standard Media Index data, average paid unit rates were up +15% versus last season. Upfront rates on NBC’s opening night were up +18% to $939,000 compared to $798,000 in the 2020-21 season. The linear audience for the telecast averaged 24.4 million viewers on NBC, representing the most-watched television show since Super Bowl LV aired in February. (Source: NBC Sports Group)

After repeated game delays last season due to Covid, including the twice-rescheduled NBC Thanksgiving game, the league and the networks that air its games are expecting a stronger season. In 2020-21, despite viewership declines, ad revenues remained strong, up +3% in the regular season, according to the SMI Pool of all major agency invoicing records.

The winner for the regular season was the NFL Network itself, which grew per game revenue by double digits (+18%), compared to FOX which grew +5%. Considering each network’s size, however, the growth by FOX represents greater relative revenue than the NFL Network.

Pricing trends last season saw scatter unit costs reaching +15% greater than upfront, marking an increase from the +8% difference observed in the 2019-20 season. The NFL Network again saw the greatest gains, with average paid unit rates up +23% across upfront and scatter, albeit from a lower starting point.

According to the SMI Pricing Suite, NFL Regular Season inventory commanded leading effective CPMs (eCPMs), on par with broadcast primetime, confirming the premium nature of the programming. For a deeper dive, network-level intelligence is available via our pricing tool.

Super Bowl LVI is still a way off. As the pandemic presses on, anything can still happen. Super Bowl LV revenues were down -6.4% over the prior season. The big game is shifting from CBS to NBC this year. Will Super Bowl LVI unit rates recover from last year’s -5.1% YOY trend? Will NBC close out the season with strong unit rate growth, as already seen with its NFL Kickoff telecast?

You can see other analyses in the media about the NFL seasons referencing SMI data here:

If you are interested in receiving NFL insights or more information on the SMI Pricing Suite, please contact us using the form below.

Complete and submit the form below.