SMI is launching a book club focused on great writings in the field of advertising and media.

“Media Planning” is a short book of assembled writing of the late great advertising agency strategist Erwin Ephron. The book has been praised for years for its simplicity in explaining complex matters of advertising math and strategy. Among the 5-star reviewers on Amazon calling it a “must” for advertising professionals are the CEO of Simulmedia and the global head of marketing science at TikTok. 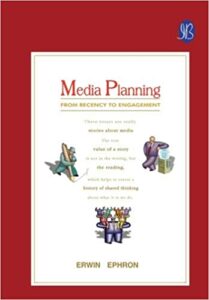 This short book assembles two dozen writings by Ephron that were so clear and concise that the Advertising Research Foundation named a lifetime achievement award for him, The Erwin Ephron Demystification Award.

Our first meeting of the book club will focus on this seminal book, specifically two chapters:

Our guest speaker will be Bill Harvey, himself a legend in the field. A former friend and colleague of Ephron’s, Harvey is in fact the subject of Chapter 1: he is “The Man Who Invented ADI’s”! He is also the first recipient (2014) of the ARF’s Erwin Ephron Award, and more recently (2022) he won an Emmy Award for his contribution to the invention of the set top box technology. Bill will be joined in conversation by SMI’s Head of Insights & Analytics, Rick Bruner. The event will include ample time for group discussion by participants as well. 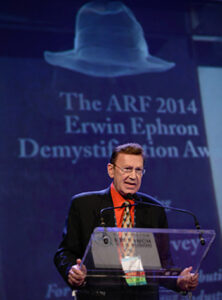 Please join us if you can.