Retail Media is Here in a Big Way: Should Search be Worried?

Media is filled with evolutionary step-change transitions which permanently alter the marketplace. Each evolutionary event, seen in terms of advertiser outlays – the media mix – is driven by incremental change during economic uncertainty. This is particularly true – and trackable – in modern times. Some of these events were covered in the Recession Planning series posted during the summer.

We could be on the cusp of a major transition within-Digital itself – the decline of (stand-alone) Search and the rise of Retail Search.

It’s during economically uncertain times when both brand managers and their agencies make changes to the media mix based on future-of-media considerations. Simply, they are more likely to reduce budgets to media or media platforms/publishers which look less likely to drive their brands’ performance in the mid-to-long term. In doing so, they can maintain or even grow the media or platforms/publishers of tomorrow’s media world.

We stand on one these economically uncertain periods today. Advertisers are making incremental changes beyond normal media mix adjustments. It appears stand-alone Search may be next to see evolutionary change. 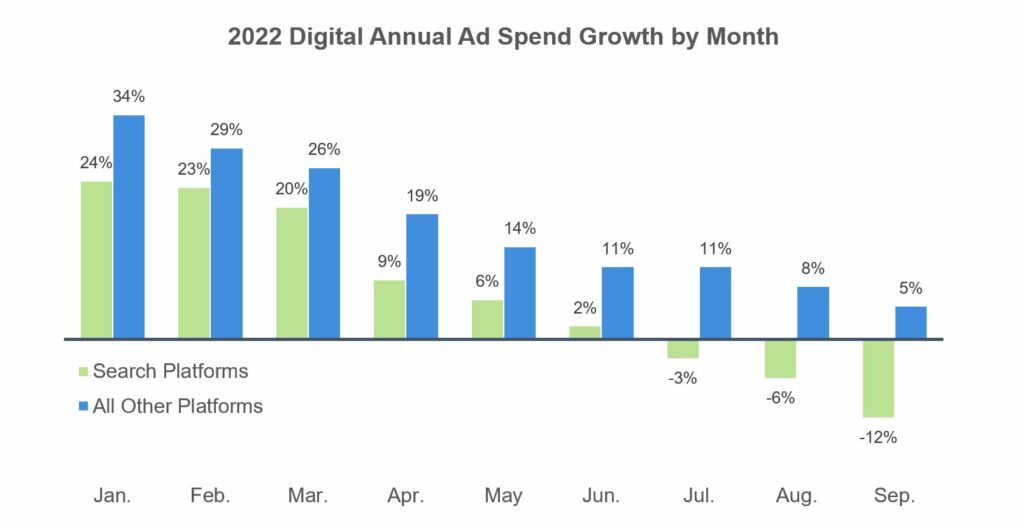 Regardless of yearly growth level, Search growth trails the rest of Digital. In January 2022, for instance, Search grew by 24% YoY while the rest of Digital grew 34% YoY, according to the SMI Pool, which captures ad spending of the largest brand advertisers. The spread was 10%-points (i.e., 34% minus 24%). In 2022, the spread has a range of 8% points to 17% points for how much lower is the growth of Search compared to the rest of Digital.

Importantly, each month of Q3 went increasingly negative for Paid Search spending by the biggest advertisers though the biggest agencies (i.e., the SMI Pool): -3% in July, -6% in August and -12% in September. The spread between the growth rates of Search versus the rest of digital in that most recent month, 17 points between -12% for search and positive 5% for all other digital media.

Search, as a consumer behavior, is as strong as ever. However, it’s where consumers conduct their searches that is driving change. That is where brands buy keywords or result placements.

Brands will follow their prospects and customers. Many marketers now have highly mature Digital distribution either directly (direct-to-consumer businesses) or indirectly (through retailers like Amazon and others). Retailers themselves are buying keywords on traditional search platforms to drive site traffic.  Consumers then continue search behavior on those sites through native search and listings within the retailers’ standardized directories.

Also, more and more, consumers are simply going to Amazon and other retailers first to conduct their searches. On those merchant sites and apps, native search or placement listings complete consumer search intent.

The chart below demonstrates the relative strength of Retailer sites and apps. Given the overlap and transitionary behavior of Search, the ad spend evolution is clear: Retail Media is taking dollars away from Search. 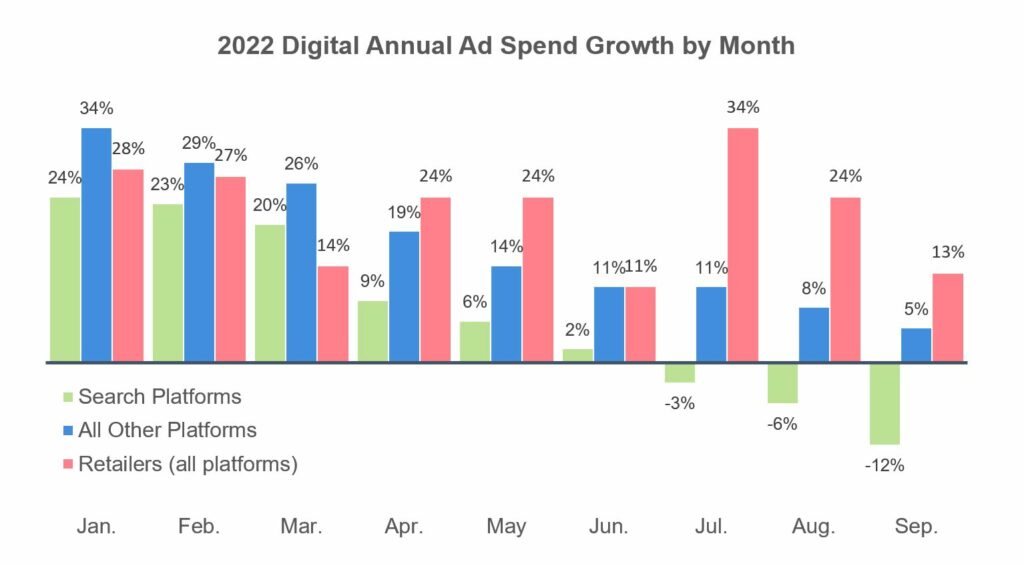 Nothing should be exaggerated. The SMI Pool captures close to half of the U.S. ad marketplace, closely representing the largest brand marketers. Search, Social, and other Digital forms have a foundational base in performance marketing, particularly with small-and-medium businesses (SMBs). Many of these SMBs do not have the marketing staff or even budget size for clear outcome measurement. They will be lagging indicators of change, if subject to the same user transitions of Search. Not all categories are the same and many don’t use online or offline merchants (i.e., Retailers) to distribute their products or services. These categories may not be impacted as greatly.

To see more closely the change in investment in Search, we group our 12 product categories groups into two nearly equal-sized groups by ad spending: those that closely aligned to point-of-sale distribution (“PSO-aligned”), meaning they sell products through retail partners, such as CPG, apparel, home goods, and those that aren’t (“non-PSO-aligned”), e.g., those who sell direct to clients, such as finance and travel companies. Looking at four time periods, Jan-May and June-Sept for both 2021 and 2022, the scale of the change becomes apparent. 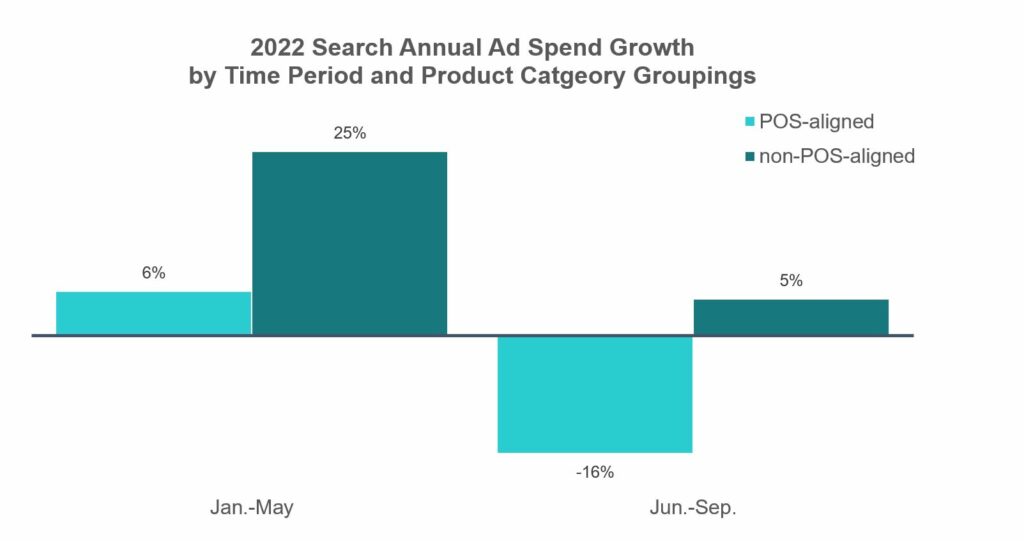 This gives us a baseline. The POS-aligned group shows both lower growth than the non-aligned group as well as a yearly decline in ad spend during the Q3 (-16% YoY). Additionally, not shown in the chart, these groups were roughly equal in size, on Search platforms with the non-POS-aligned group at 52% share in 2021 (Jan.-to-Sep.).Now, let’s look at how this same grouping of product categories behaved on merchant sites.

It’s noteworthy that ad spending on Retailer sites by the POS-aligned group is roughly four-to-five times as large as that of non-POS-aligned categories. Again, these groups were roughly equal on Search platforms. This makes sense and is a good gut check of the data.

The important comparisons are for the POS-aligned categories. During the same period that they are shrinking their investment in standalone search engine marketing, they are dramatically growth their spending on search-formatted advertising directly on merchant sites.

Additionally, Q3 growth (23% YoY) is much stronger than the -16% YoY decline this group of advertisers saw in Search (see the earlier Search chart).

This suggests a trade-off could be happening as a nearly 40%-point spread is quite jarring. For the POS-aligned group, yearly growth was +23% for June-September on Retailer sites and down -16% YoY on search.

Pass the popcorn, it’s going to be a gripping fight of the titans

Ad spending to Digital continues to go through its own evolutionary cycles. General economic weakness forces (or, allows) marketers to make incremental media mix changes. We may be witnessing a peak in stand-alone search – at least as far as a component of paid search. Get out the popcorn as two Digital heavyweights, Amazon vs. Google, vie for supremacy.